I am amazed at how some right-wing bloggers love going through the college papers of Hillary Clinton or Michelle Obama and claim to uncover the secret ideology of that person. Of course Clinton and Michelle Obama both went to great schools and had ambitious papers. They should be commended for that.

After talking with a friend, I went back and revisited a sexual ethics paper, Sex, Love & Utilitarianism, I wrote while a student almost 20 years ago. It is about sexual ethics, a topic as a minister and newly single/divorced man, I've been thinking a good deal about. There are parts of this paper, I no longer agree with. Certainly, my worldview is more complicated than it was in 1989, but I think the core is quite helpful (for no one else than me).

I no longer view utilitarianisms as the ideal ethical system. I can't ever now imagine a case when incest could be morally acceptable. But this paper is an interesting part of my own ethical journey.

I guess I'm most proud of the line that, "Condemnations of homosexuals are based in misunderstanding and self-righteous assumptions. Such criticisms do not have a place in the world today." Of course, I knew I held that intellectually, but I probably wasn't personally at that place. For in 1989 there weren't many openly gay or lesbian individuals at Graceland.

I did not yet know what my brother was gay, as were many of my closest friends. I remember as a first year seminary student having an older man (and by older, he might have been my age now) come out to our small group as gay. Intellectually this was "no problem" for me, but I remember actually physically shaking because of the anxiety I had about being so close to a gay man.

Sigh. We are always growing and adapting. So, as if anyone is interested. I'm publishing this paper online. (Sex, Love & Utilitarianism is on Google Docs, a click should just take you there.)
Posted by Todd at 8:32 AM No comments: 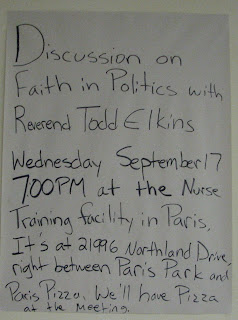 I did a discussion on Faith and Politics for the local Obama Office in September. This is the sign that they used in the office to make calls.God, I love the political season.

For more info, check out The Lava Brothers.
Posted by Todd at 9:55 PM No comments:

Over the past year, I've noticed the "Fallout Shelter" signs around more and more. This sign is located right across from the Truman House in Independence, Missouri.

The Fallout Shelters was from the last big "War on Terror"--The Cold War. And anyone that thinks that duck and cover or a brick building will save you from nuclear blast is just absurd.

Sometimes in our life, we need fallout shelters. And safe places to land. I'm glad I've found mine. 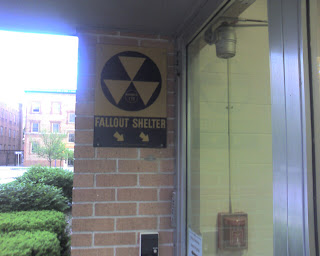 Why did I stop and pick them up? Because I was convinced they were mine, but I have never done Covey's teen edition before. All other signs pointed to that being my papers.
Posted by Todd at 8:40 AM No comments:

Frick Awareness: Find a Cure (redacted by the editor)

You know, when I was growing up, I always wanted a sister. Yes, I imagined the nice things they would say to me and perhaps most importantly, help to fix me up with their friends. But alas, the Goddess gave me 2 brothers. But then their are sister-in-laws. I would never put the F-word on my blog without the great excuse that I'm just supporting my sister-in-law, Janet.

See Janet and me (like many bloggers) are naturally introverts and blogging gives us a chance to "say" the things, we sometimes can't in real life. Though the blogging world is real, I think.

So, in honor of Janet and in the hope that she gets rich on her great design. I'm putting a plug out there for her movement to Frick Awareness: Find a Cure. (Janet, I hope I am not violating your trademark, if so, please contact my attorneys. Yes, after going through a divorce, I have too many). Love, Your Brother-in-Law, Todd

PS: What would the minister who did you wedding say about you using the F-word? Oh yeah, that was me. He thinks it is pretty cool.
PPS: Just so you have the links clear: Janet's Great blog. Her Store.
Posted by Todd at 1:05 AM No comments:

Ok, I went walking today for Obama and had the chance to register two first-time voters. Wow, what a rush, eh? A chance to help two young men exercise their rights as citizens of this great country.

The Michigan Forms are a little hard to navigate, and so I helped the guys the best I could. I mean, I do have a master's degree and did voting rights work in the last election, I should be a good guy to help, right?

Sigh. Well, Michigan requires two signatures on their form and they only signed it once. Why does Michigan require 2 signatures? Right on top of each other? I can only assume it is a voter suppression tactic, unless someone can tell me a better explanation.
Posted by Todd at 7:07 PM No comments: